September 17, 2016 – Most Pitchers Ever Used in a Shutout After Carlos Carrasco Is Hit with Line Drive

The Plain Dealer’s Sunday Sports Headline the next day read, “Sept. 17: The day Cleveland Indians’ postseason dreams ended before they began.” Of course, that turned out to be false. Although 2016 ended in heartbreak, the heartbreak happened in Game 7 of the World Series and was hardly a foregone conclusion.

The Tribe had an eight-game lead over Detroit in the Central and was poised to clinch the Division, but had been wracked with injuries–most recently to Danny Salazar and Yan Gomes. A strong regular season including a then franchise-leading fourteen game win streak had the Indians in a strong position, but fans and writers were doubting their staying power.  Carlos Carrasco was set to square off with Justin Verlander in the premier matchup of the weekend.

Ian Kinsler lined Carlos Carrasco’s first pitch right back to the mound that struck Carlos in the hand. Carrasco left the game and was later diagnosed with a broken bone in the little finger of his throwing hand. It was immediately apparent that he was done for the season.

A day that started as an opportunity for a workhorse starter to eat innings and prepare for the post-season became a bullpen day in an instant.

Terry Francona called Jason Bere the bullpen coach, “Tell them to put their seat belts on, ‘because they’re all going to pitch, and we’re going to win.” First up was Jeff Manship, who attempted to right the ship. Manship erased Kinsler by getting Cameron Maybin to ground into a double play. He went on to pitch a scoreless 1 ⅓ innings.

Through all of these changes, Justin Verlander worked through the Indians lineup. He pitched seven scoreless innings, giving up only one hit and four walks. Alex Wilson replaced him on the mound for the bottom of the eighth and held on to the scoreless tie.

Andrew Miller came on to pitch the top of the ninth for the Indians. He battled Miguel Cabrera through an 8 pitch at-bat and eventually set Miggy down on a swinging strikeout. J.D. Martinez came up with a two-out single, but was left on base when Justin Upton lined out to right.

After the Tribe squandered a two-out rally in the bottom of the ninth, Andrew Miller returned to pitch the top of the 10th. Miller struck out the first two Tigers, and then got Jose Iglesias to ground out weakly back to the mound.

Justin Wilson stayed on to pitch the bottom of the 10th for Detroit. Carlos Santana drew a walk to lead off the inning. Jason Kipnis laid down a bunt, but Jarrod Saltalamacchia scooped it up in front of the plate and forced Santana out at second. With Franciso Lindor at the plate, Kipnis advanced to second on a wild pitch, and then stole third. Lindor drew a seven-pitch walk to put runners at the corners. Detroit issued Mike Napoli an intentional walk to load the bases and set up a double play.

Jose Ramirez stepped in and knocked Wilson’s 2-2 pitch into center field scoring Kipnis easily. Jose’s walkoff single was the club’s 10th walkoff win of the season. Miller was credited with the win and later remarked, “”We have no other choice … we have to find a way to win – no matter who is starting.” There could not have been a better tagline for the six weeks that were about to come between Game 148 and Game 7 of the World Series.

The Indians used nine pitchers who combined for a four-hit ten strikeout victory. The bullpen crew gave up only three walks throughout the whole game. 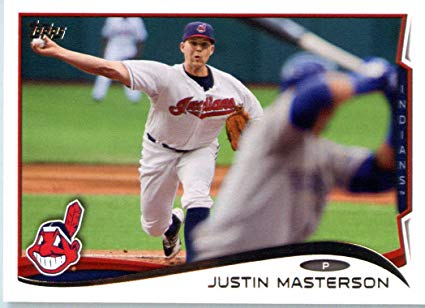 In Game 1 of 2013, Justin Masterson and the Indians defeated the Blue Jays behind NL Cy Young winner R.A. Dickey, who had been traded from the Mets in the offseason.

The Indians sat at 2-3 on the season coming into Game 6 against the Rays. The Tribe Entered Sunday afternoon at the Trop’ with reigning AL Cy Young winner David Price on the mound. It seemed a cruel twist of fate to face both of the previous year’s Cy Young winners in the first week of the season.

Masterson pitched a gem of a game. Seven innings, eight strikeouts, and only three walks. Masterson faced a bases-loaded threat only once in the bottom of the first. With Ben Zobrist on third, Evan Longoria on second, and James Loney on first, Masterson struck out Rays shortstop Yunel Escobar on three straight pitches to end the threat.

Michael Bourn led off the game with a double and then stole third, but the Indians were retired without scoring. In the top of the 2nd, Drew Stubbs drove in Mike Aviles to put the Tribe on the board.

In the top of the 3rd, Price walked Asdrubal Cabrera and Ryan Raburn. After a lineout by Nick Swisher, Mark Reynolds hit a home run to deep center field. After that, the rout was on. Lonnie Chisenhall, and Michael Bourn notched their first home runs of the season. Carlos Santana had an incredible day with 5 hits in 5 appearances, including a line drive home run off the right field foul pole to add an exclamation point to the  13-0 game.

After the game, Masterson demurred with some solid pitcher platitudes,

”The boys came out and they just bamboozled, just started hitting some balls,” Masterson said. ”It was pretty cool to see. That’s pretty much the testament. They played good defense, made some good plays out there, and they were just crushing balls. And they were putting runs on the board, and it makes the job on the pitcher a lot easier.”

In 1989 Bruce Hurst and the San Diego Padres defeated Orel Hershiser with the Dodgers and Frank Viola after Viola was traded from the Twins to the Mets at the trade deadline in 1989. Pitching for the Braves in 2003, Shane Reynolds defeated Randy Johnson with the Diamondbacks and Barry Zito with the Athletics in an interleague game. However, Masterson is the only pitcher to have accomplished this unlikely feat, dueling with the reigning Cy Young winners in consecutive starts and coming out on top.